DTM Legal’s Mark Williams looks at the major new building projects in Liverpool, and gives his tips on drafting a construction contract.

If you can judge how well a city is doing by counting the number of cranes towering above its skyline then in Spring 2015 Liverpool is doing nicely with 17 large cranes on building sites across the City Centre and £1.13 billion worth of development underway.

With over £520 million of investment due to complete in the City Centre during 2015, investors have returned to Liverpool as finance for construction projects becomes more accessible.

Liverpool is firmly entrenched as premier UK tourist destination with a hotel offer to match. The city’s growth as a major tourist, cultural and conference venue has seen the value of completed hotel developments since 2014 reach £27.2 million. Major new hotels such as Aloft Liverpool and 30 James Street add to the hotel offer and growth is continuing with an impressive value of £86.8 million of hotel refurbishments or developments currently on site. 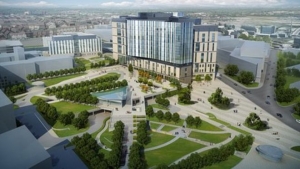 The £429 million rebuild of the Royal Liverpool University Teaching Hospital is one of the most significant construction projects in the North West. The project currently employs over 600 construction workers and the existing site will be re-developed as a new bio-medical campus employing 5,000 scientists and technology experts.

Universities continue to develop their estates due to the increase in competition in the Higher Education sector. The expectations of students, particularly those from overseas, for an improved student experience has risen and been a contributory factor in greater investment in the estates that are owned by universities.

The University of Liverpool’s Materials and Innovation Factory

The value of major schemes completed in the City of Liverpool since January 2010 is £2.8 billion with a value of £648 million completed since January 2014. However, as the number of projects gathers pace even the smallest construction project has a potentially complex structure of contractual relationship between multiple parties.
It is important to ensure that contracts are drafted in a way that protects a party’s rights. Here are 5 things to consider when drafting a construction contract to ensure your rights are protected;